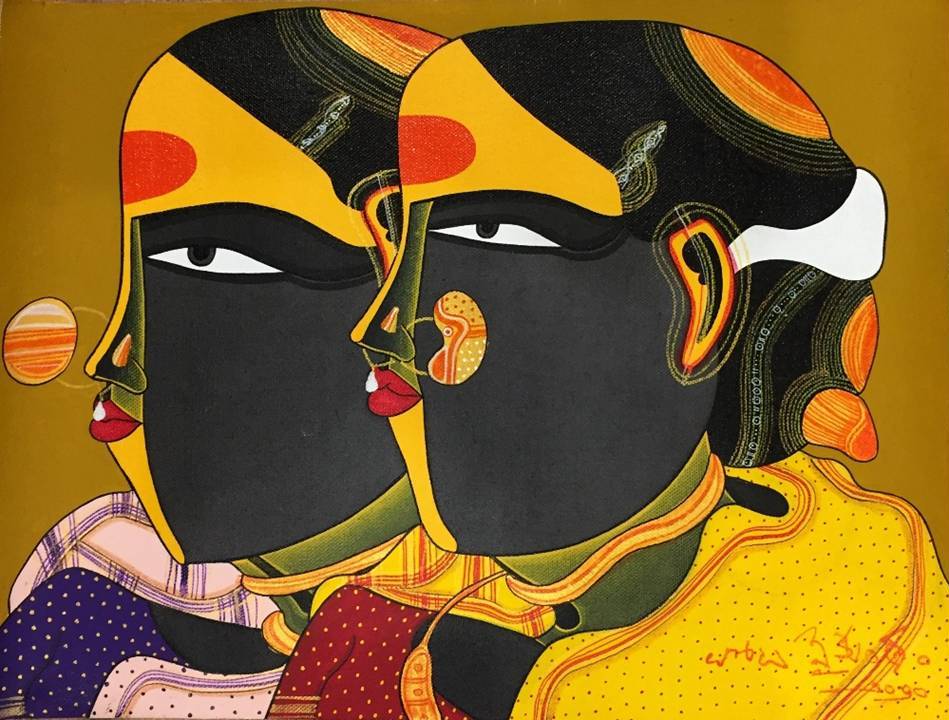 Thota Vaikuntam hails from Andhra Pradesh, in South India, and finds his inspiration in the rural areas of the state. Men and women of his village are often the central characters of his work. Telangana women, in particular, are frequent subjects for his works. The obsession can be traced back to his childhood, when he used to be fascinated by the male artists who used to impersonate female characters in the traveling theatre groups that performed in his village. He admits finding the women of his village very sensuous and that he only attempts to capture their vibrancy.

In an interview with Saffron art, the artist explains his early apprehensions when it came to art. “…In private I began sketching images which were very Indian, but which I thought were quite shocking. They were very obviously inspired by the spiritual and sensuous tradition that’s part of Indian mythology and art. I hid them from public eye, because I thought they were very sexual.”

Vaikuntam’s art has a sense of strength to it, a power that emanates from the paint or charcoal that he applies to the surface, from his controlled lines, and from the fine strokes that he executes. He generally uses only primary colours, as he believes that composite colours do not exist in nature and are therefore, unnatural. As he explains, “I like using rich primary colours, which give a sense of character and depth to my paintings. Like reds and saffron and even orange, because these are essentially Indian colours. I do not like using colours that are mix of two, because they are not natural, they don't exist in surroundings around us, in our everyday life”.

Born in 1942 in Boorugupali, Andhra Pradesh, T. Vaikuntam completed a Diploma in Painting at the College of Fine Arts and Architecture, Hyderabad, in 1970, and then another in Painting and Printmaking from the Faculty of Fine Arts at Maharaja Sayajirao University, Baroda, in 1972. He held his first solo exhibition at the Kala Bhavan in Hyderabad in 1973, and since then has had regular shows at various galleries in Hyderabad, Bangalore, New Delhi, Kolkata and Mumbai. His most recent shows have been ‘Yes, I am He’ organized by India Fine Art at Jehangir Art Gallery, Mumbai, in 2007; ‘Telangana: Inheritance of a Dream Lost’ at Art Alive, New Delhi, also in 2007; and ‘Mukham’ at Sanskriti Art Gallery, Kolkata, in 2006.

Some recent group shows that have included Vaikuntam’s work have been Indian Harvest presented by Crimson – the Art Resouce, Bangalore, at SG Private Bank, Singapore, in 2009; The Root of Everything at Gallery Mementos, Bangalore, in 2009; Post Independence Masters at Aicon Gallery, New York, in 2008; 6 Artists Show at 1x1 Gallery, Dubai, in 2006; Tradition and Change at Arts India, New York, in 2002; and Ignition at Crimson Art Gallery, Mumbai, in 2000.

Among his several honours are the National Award for Painting, which Vaikuntam received in 1993, and the Biennale Award from Bharat Bhavan, Bhopal, which he received in 1988-89.
The artist lives and works in Hyderabad, Andhra Pradesh.