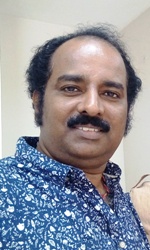 “Humans are the most beautiful creation of God. That’s why my work has multifarious glowing and sharp colours representing a combination of truth and fiction, that had kept the respect of art.”       Sachindra Nath Jha

Sachindra Nath Jha was born in 1975 at Madhubani in Bihar. He studied at the College of Arts at Patna, Bihar. Sachindra Nath had the good fortune to grow up surrounded by the richness of Madhubani art. Painting has fascinated him since his childhood and you can see that he was highly influenced by the Madhubani art form.

“Ghat is series of steps leading down to a water body, and the Ghats of Varanasi are the most mesmerizing on earth. The auspicious scenario full of magnificent works and activities are the creations of human. And in more common term Ghats are known for their pandits, pandas etc.”

Sachindra Nath’s works are based on the river Ganga and all that happens around the river that includes the flowers, pujas and ceremonies. He loves to use vibrant colours like green, blue, violet and red! His fondness for colours started when he was a child, as he watched his mother make beautiful “rangolis”. Though he started off as a painter and has worked for several years in this medium, he started to focus on sculpture from 2005 and has created his unique space in this area.

Sachindra Nath has held 10 solo exhibitions with many prime galleries in India. Some of them were at the Nitanjali Art Gallery and Visual Art Gallery in New Delhi and the Museum Gallery and Arushi Art Gallery, Mumbai. He has also participated in more than 50 group shows in India and abroad that include cities such as London, Switzerland and Kuala Lumpur and was part of the Bodhgaya Biennale in 2016.

Being highly talented it is no surprise that he has won many prestigious awards for his work which includes the Kala Samman (State Award) in 2014. The Lalit Kala Akademi’s National Research Grant Scholarship Award, was conferred on Sachindra Nath in 2002. The artist lives and works out of the millennium city of Gurgaon