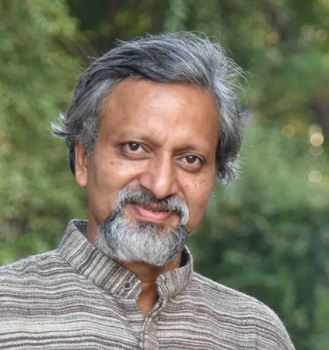 Neeraj Gupta born in 1969 in Delhi grew up and lived along with his five siblings in the capital city. The father a poet and a cloth merchant had a great interest in collecting old metal objects which he could find in trash market in the old part of the city. Young Neeraj too found them fascinating but was advised to concentrate on his studies which he faithfully did. After his schooling, Neeraj did a degree in building science from the School of Planning and Architecture, New Delhi. But the amazing collection of artefacts that he could see lying around in the house, pulled him in a different direction. He would take a keen interest in folk art, craft and old objects and in due course took to sculpting and creating art as a serious profession.

Neeraj is interested in the concept of public art and most of his sculptural creations are in large scale be it in stone, marble, bronze, wood, fiberglass or another medium. His work oscillates between the softness of the wood and the hardness of rock or a delicateness intermingled into the chemistry of bronze. His modernist compositions tend to be fluid, abstract and poetic, in spirit and form. The wooden sculptures appear influenced by the nature of the wood itself, carved as if a termite has been working on the material. The honeycomb structures are often carved and minimalized. Working on sculptures in themed series Neeraj plays with material befitting its nature. His metal sculptures are inspired by traditional bronze casting craft to take on forms associated with various deities, figurines, household objects and cultural artefacts as in rural and folk arts. He also sculpts in abstract forms and works in rhythm with the material, to unveil the form lying within.

President of the Delhi Art Society, Neeraj, besides doing his own work, has also curated some landmark sculptural shows held at various prestigious centres in Delhi. As an expert on folk and village arts of India, he is associated with several cultural initiatives. His work has featured in biennials including Florence Biennale, Italy, Santorini Biennale-Greece and exhibitions held in India and abroad. He has been honoured with numerous commissions by the government of Delhi and it is part of the collections held in South Block office, Central Atrium of D.R.D.O. HD. QRTS., Central Cathedral Church and Indian Islamic Centre all in New Delhi and by collectors in Las Vegas, U.S.A. Holland among others. Neeraj lives and works in Delhi.