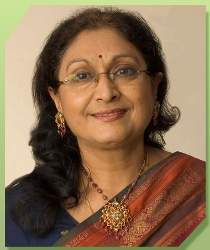 An economist turned painter and a brilliant colourist with a strong individualism in her work, Nayanaa Kanodia can be considered to be the pioneer of the genre of   L’Art Naif in India. She has held innumerable shows in India and abroad.

Her paintings are in the collection of major art collectors and corporate houses all over the world.

She has exhibited and demonstrated her painting techniques in   Victoria and Albert Museum in London.

She was the first Indian whose paintings were selected in Paintings In Hospitals. UK.

She has been featured in an international publication  Women in Art by Reinhard Fuchs, a rare honour for any Indian artist.

She was chosen from all the artists of The Commonwealth Countries to have a solo show in their newly renovated complex in London.

Impressed with the social messages being conveyed in her paintings, a consortium of schools in Los Altos, U.S.A. is using her work as a medium of instruction to their students.

She has recently been appointed as a juror for PrismaArt Prize for their Rome Dividere in Europe. She is the first Indian on their panel which is an honour not only for her but also for her country.

She is associated with many charitable societies, gives talks and conducts workshops and presentations on art in various organizations and universities. She is also a judge in art competitions. She has attended Art Camps in India, London, Sweden, Italy, Moscow, Greece,   Bangkok and Cambodia.

Her work is characterised by the air of whimsy, flat bright polished surfaces and the extraordinary plethora of intricately worked details and patterns.

Nayanaa says “When the world which disturbs me and the world of which I have a deep understanding are amalgamated and absorbed,  a new artistic dialect is created. My paintings intend to make you feel that you are watching a snapshot of life at maximum preposterousness, exuberant and bursting with energy. The conversation I hope to create in my work is a certain truth of life and on a deeper level, a well thought philosophy. Individuals may interpret my paintings in vastly disparate ways and each view will be equally logical and plausible, thought-provoking and intriguing. My work delights the viewer with its whimsy yet contains the most important social messages of our lives.”