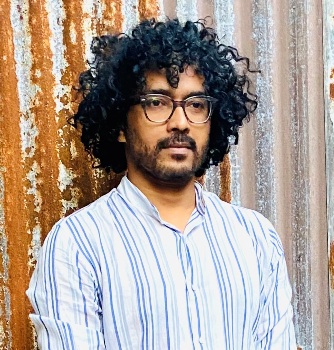 Narayan Chandra Sinha born in 1977 at Nalhati in West Bengal grew up in Calcutta/Kolkata where his family runs a business of automobile parts. He did his schooling in the city and passed his bachelor’s degree in science from the University of Calcutta. His interests though were more towards reimagining things and working in a domain beyond the stereotypical, which took him on a course to become a self-taught artist.

The neighborhood where he lived, with its flourishing automobile industry and its mechanical environment, presented a stark contrast from mother nature and its raw elements which young Narayan had a fascination with. It led him to start making interesting forms and objects out of waste material and discarded automobile parts, which he could find dumped around. Metal drums, kerosene stoves, truck parts, radiators and headlights etc. are welded together turning them into magnificent sculptures. His Devi series of sculptures and installations entailing metaphors from the world of mythologies turn rusty metal pieces and greasy automobile parts into delicate forms. The work inspired by Bengal’s Durga Puja pandals makes a deep impact on the senses. His decade-long project Firelight in fluid abstract sculptures deals with metaphors made out of rusted and wasted metals as it also raises issues around environmental degradation. Combining furniture with ritual and objects of daily use including fabrics and hangings besides scrap material, his creations come interwoven with traditions, ritual practices and modern technology. It represents the local culture within a global perspective.

Narayan’s work aesthetics inspired by mother nature run across sculpture, art installation, design, jewelry, paintings and more. It has featured in over a dozen solo shows and several group exhibitions held in Delhi, Kolkata and Ahmedabad besides other cities. It is part of the collections held in private homes and corporate offices besides the Museum of sacred art in Brussels. The artist lives in Kolkata and works from his studio in the city.