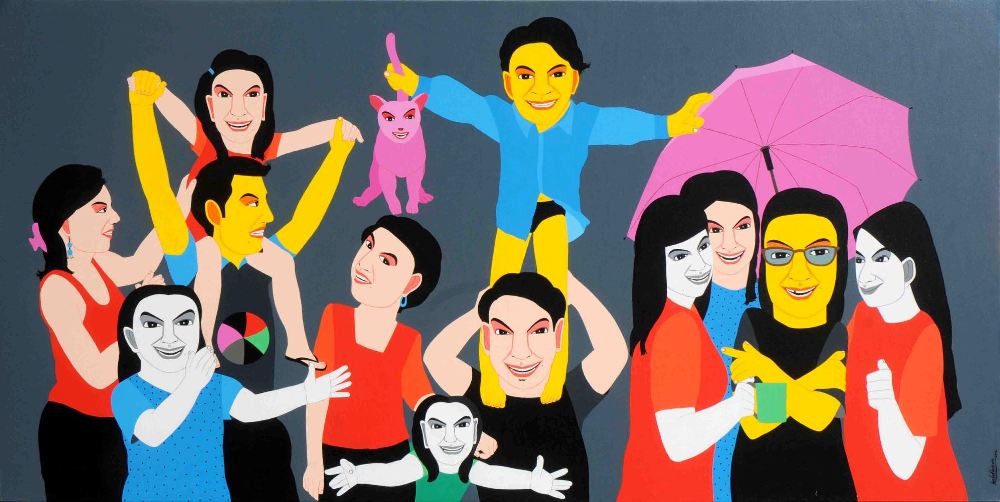 Born 1975 at Jamshedpur, Farhad Hussain completed his graduation in science before joining Kala Bhavan at Santiniketan for another Bachelor’s degree in pursuit of his interest in art and followed it up with further studies for a postgraduate diploma from the Faculty of Fine Arts in Baroda. His colourful work that includes drawings and water colours besides paintings on canvas, features day to day visual experiences of the middle class urban India. He endows his narrative with an iconography and personality through his figuration, their posturing, dress and the surrounding imagery. The drama of subtle complexities of human relationships and social environment are grounded with a sense of satire mixed with pathos. Farhad’s colours help enhance the brightness and aura of his paintings while he also partakes elements from traditions such as the formulaic textile patterns of Indian miniatures. His compositions are often set in a familiar drawing room or a social space, playing out with humour and sarcasm, the narrative psychologies of human life and encounters at various levels. This young artist who has also experimented with sculpture, has already carved a niche and an instantly recognizable individualistic style befitting his aesthetics and concerns. A recipient of the Nasreen Mohamedi scholarship, he has also been awarded the best prize for his water-colour at the art college annual exhibition. He has recently had a solo show in Korea besides others held in India. Farhad has also participated in several important group shows held at Baroda, Mumbai, Kolkata and London.

Farhad lives and works in Delhi.