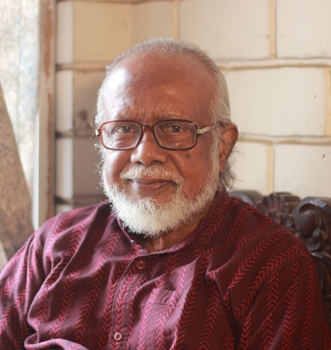 Biman Bihari Das (full name Prof Biman Bihari Das) born in 1943 in Tamluk, West Bengal, grew up in a large joint family of landowners. The educated and culture-soaked family was headed by Bimanda’s father who was a jailor but turned into a freedom fighter and practiced law to defend the country as did the uncle who was a fighter pilot. Biman a naughty child took more interest in drawing, painting and music instead of his academic studies when still at school. Given this inclination, he got admission for a Diploma in Modeling & Sculpture at the Govt. College of Art & Craft, Calcutta and followed it up with a course in Teachers’ Training Art Appreciation (History of Art), also from Calcutta University.

A sculptor of considerable repute, Biman Bihari Das’ work shows his strong rooting in classical traditions with a touch of modern aesthetics. Adorned forms generate a live energy to his sculptural creations be they in large or small format. The delicate nayaka and nayikas as on pillars in Indian temple structures and monuments appear in a mix of narrative and abstract forms. He has also created statues and portraits of predominant figures and icons of India including Gandhi in stone and bronze which are on display in different countries around the world as well as in parts of India. He also sculpts icons representing Indian mythology in a minimal decorative amalgamation suggestive of modernism. The contours and smoothness of his sculptures mostly in bronze stand distinct for their bluish-green patina. Prof Das has taught and mentored several prominent sculptors currently practicing in India first as head of the department of sculpture at the Delhi College of Art and later as the Principal at the College of Art in Kolkata. Currently, Biman Bihari Das heads the governing Council of AIFACS in Delhi.

Honored with Padma Shri, the fourth highest civilian award issued by the Government of India, he has also received scholarships including the Full bright Scholarship from the United States of America and Indo-Hungarian Cultural Exchange Program from the Hungarian government. Commissions by official agencies and corporates houses keep him busy and his work has been collected by numerous private and corporate institutions in Bombay, Goa, Hyderabad, Bangalore, Calcutta and Delhi and besides U.S.A., Germany, Egypt, U.K. Pakistan, Nepal, France, Belgium, Canada, Italy, South Africa, Yugoslavia, Hong Kong, Portugal, Zambia, Korea and Switzerland. Biman Das lives mostly in Delhi and has his studios both in Delhi and Kolkata.