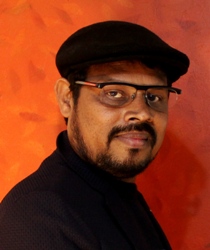 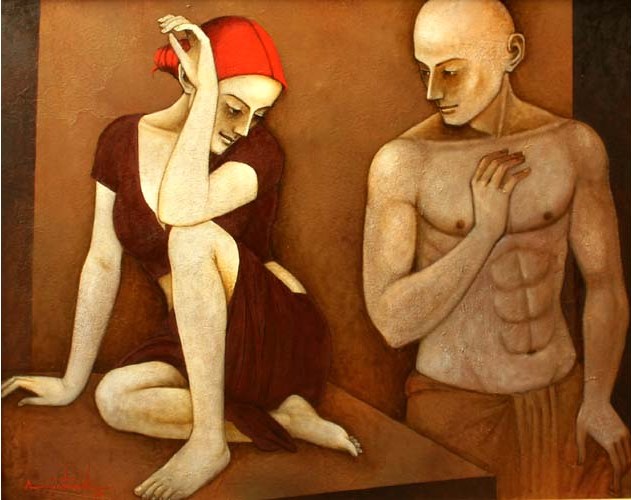 Asit Kumar Patnaik passed his bachelor’s degree in fine art from Govt. College of Art and Crafts at Khallikote, Orissa and  Masters from BHU, Varanasi, topping the list. He specializes in oil and acrylic on canvas, displaying great mastery over his textures and his figures. Relations, the series that has got him national and international renown and the appreciation of critics and viewers alike, typically features a male and a female figure, against a wide range of semi realistic—almost bordering on abstract—backgrounds. The man always wears a tonsured look and his muscle tones are remarkably fluid, and his eyes alternate between a detached glare and a penetrating gaze, often within a single frame. The female is typically swathed in red, and Patnaik visualizes her as a concentrate of immense energy, her hair recoiled in a bun while she has a measure of the man, ever so alert in her penumbral vision

Intriguingly, the woman figure appears to claim greater attention in the new set of works. Critics and viewers have identified it as a salient feature in Patnaik’s work. As the painter once, it may well have stemmed from a subconscious impulse. The woman in this series is bold, colourful and forthright. She is ready to face any challenge, even as she celebrates her very existence. The thoughtful, pensive and introspective self for once is matched by an abandon and courage that calls for a direct engagement. The greys in the frame are often overwritten by bold colours. The man and the woman now wear deeply coloured selves. Their strength is no longer implicit, but confidently visible, even if retrained. It is this easy shuffle between the obviously full blooded and the carefully controlled that makes these works some of the most mature in Patnaik’s oeuvre.

He has Exhibited in over 25 solo shows including Art Expo, New York-  2016 , World Art Dubai-2017 & 2019, Solo show at Inter Art Gallery , Aiud, Romania-2018 , AAF London-2020 and over 90 group shows in India and abroad. He has participated in some important events like  10th Harmony Show, The Florence Biennale-2011, Global Art Fair Dubai-2015 & 2016, KKB International Art Festival, Malaysia-2016, Spectrum Miami-2016. BienalIzmir, Turkey-2019. His work is part of the private collection of the President of India, and of several other public and private collections in India, USA, UK, South Korea, UAE, Australia, Bangladesh, South Africa, Germany and Switzerland.

The Artist is currently based in New Delhi.