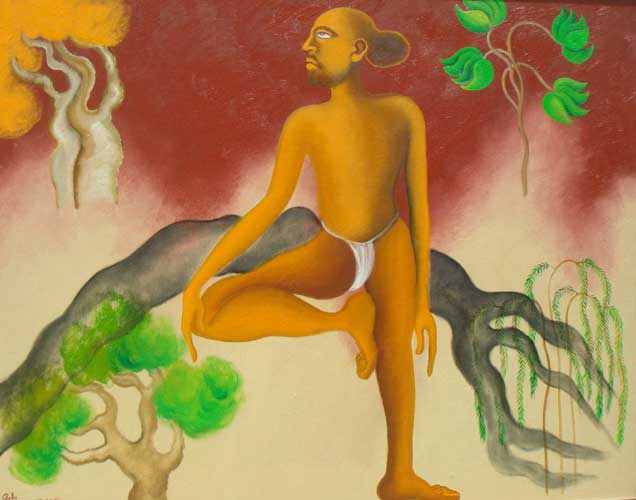 Arpana Caur has been exhibiting since 1974 across the globe. Her solos apart from Delhi, Mumbai, Calcutta, Bangalore and Chennai have been in London, Glasgow, Berlin, Amsterdam, Singapore, Munich, New York, Stockholm and Copenhagen National Museum. Her work can be seen in Museums of Modern Art in Delhi, Mumbai, Bhopal, Chandigarh, Düsseldorf, Singapore, Bradford, Stockholm, Hiroshima & Victoria and Albert Museum London. She was awarded a gold medal in VIth International Triennele 1986 in Delhi. She was commissioned by Hiroshima Museum of Modern Art to execute a large work for its permanent collection for the 50th anniversary in 1995, and by Bangalore and Hamburg to do large noncommercial murals in public spaces. Since 1981 she did three large non-commercial murals in Delhi. Her subjects range from Environment, Time, Life and death, Unequal distribution of wealth, communal riots, women, to spiritual quests.